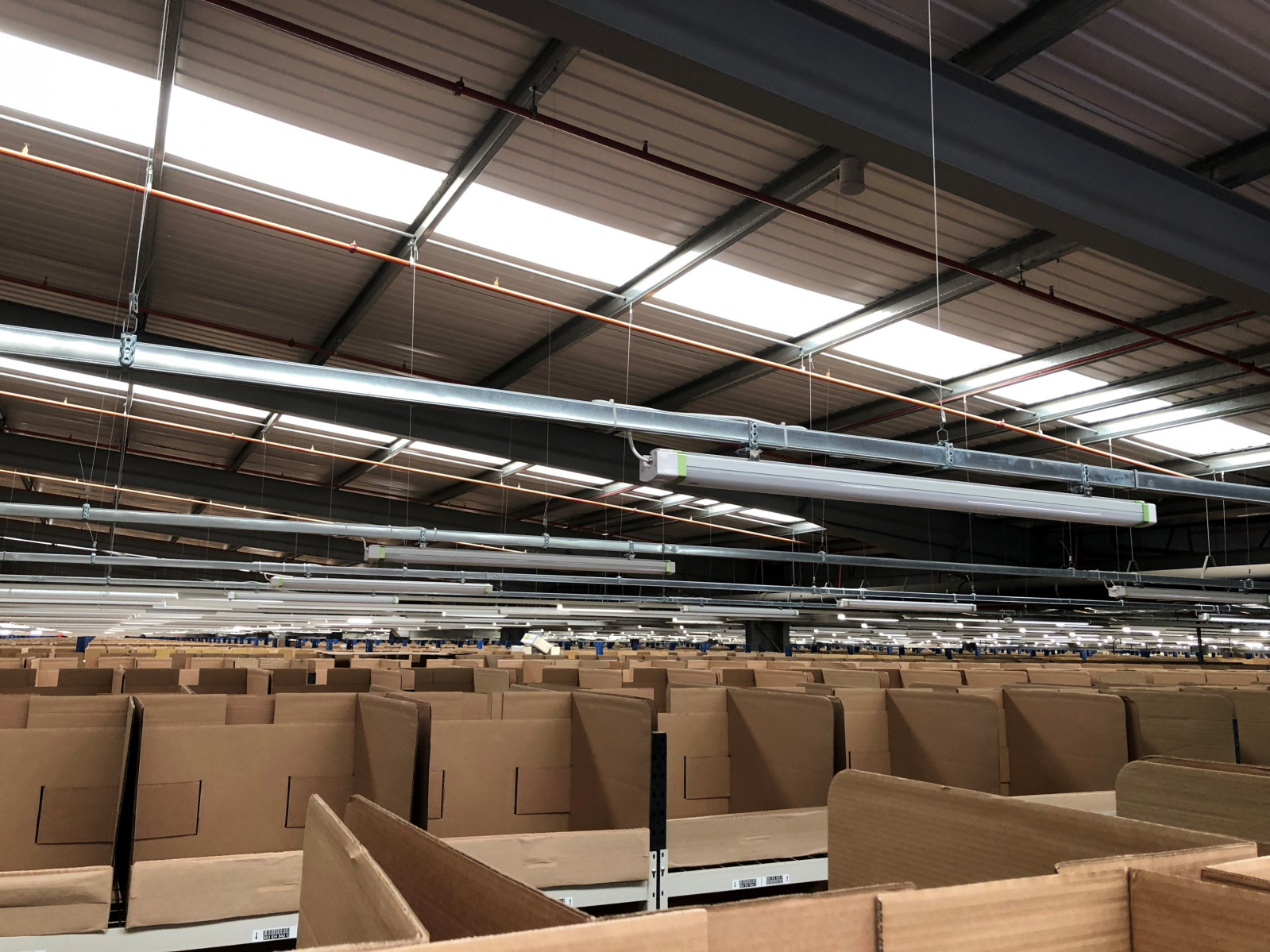 Ecolighting UK has recently been specified for the new LED lighting at the Debenhams warehouse in Peterborough to upgrade the previous fluorescent systems.

Debenhams, a multi-channel brand with a proud British heritage which trades out of over 240 stores across 27 countries, decided to increase the overall capacity of its fulfilment services at one of its distribution centres in Peterborough.

The retail giant reworked floors one, two and three of its warehouse, and chose Ecolighting’s Sapphire LED linear and Altos emergency LED lighting to be fitted throughout following the success of a previous project through leading supplier of storage equipment Link 51.

Paul Street, Engineering Manager at Debenhams commented, “Ecolighting won the tender for the lighting upgrade and based on our past experience with them we were delighted to be working with them again. We needed lighting that was specific to the project; the mezzanine floor is fitted with shelves and has narrow aisles so we required a system that matched the arrangement of the warehouse.”

He continued, “Ecolighting offers a specialist LED system that is energy saving and works well with the control system we currently have in place. The lights time out when an area is not in use and with the five-year guarantee, 12-month installation warranty and the fittings being maintenance-free, we’re very happy with the results. We wouldn’t hesitate to work with Ecolighting again in the future.”

When assessing the installation, Ecolighting considered the running and maintenance costs for the site as well as the energy efficiency, maximising the reduction in CO2 and fitting the design criteria. With no natural daylight available on floors one and two, Ecolighting removed the current fluorescent lighting and replaced it with a more effective and energy saving LED system. To cope with existing demand, even after converting floor one from an open automated area to a fully racked picking area, significant energy savings were achieved because of the LED and sensor technology.

For the Debenhams installation, Ecolighting drew on its extensive portfolio of LED lighting products, particularly its Sapphire LED linear with built in sensor and Altos emergency LED fitting specifically designed for mezzanine floors. By installing the Sapphire LED linear, Debenhams has the added benefit of a sensor which is activated by occupancy. Its wide range of sensitivity means it performs equally well at all heights. The sensitivity is user adjustable, which is particularly useful in an environment where fast moving mechanical handling equipment is being used.

The same sensor incorporates light level monitoring through DALI dimming. By constantly reading the light levels in its range, the sensor detects when it needs to deliver light and how much to deliver in order to maintain the required light levels. This function revolutionises an organisation’s control of its lighting, allowing management to determine and deliver the precise light levels required, thereby fulfilling health and safety needs whilst also cutting the cost of providing unnecessary extra light.

The same function also enables the luminaire to steadily increase output, compensating for the gradual deterioration that affects all lamps over time and extending the maintained light levels for longer and reducing costly maintenance intervals.

Ecolighting’s commissioning service ensures the lighting is correctly set up at the outset according to the lighting design in consultation with the customer, and its aim is to deliver the best balance of energy saving and operational functionality. Once commissioned, the system operates smoothly and automatically, requiring no further adjustment.

Each DALI fitting is capable of a pre-determined set-back level. Levels range from 100% to 1% and can be set to hold a lower light level for a pre-determined time to offer a background illumination level (at times of zero occupancy) or off completely. Once triggered by occupancy the fitting brightens to the higher output level and holds that level until no occupancy is sensed

LED lighting technology has been significantly developed over the last 12 months. Efficiency of products now exceeds 140 Im/W for linear fittings and 160 lm/W for high bay fittings and with the use of prismatic diffusers and lenses, luminaires can now manipulate light delivery from what is essentially an omni – directional light source to provide a more usable, even spread of light from each luminaire.

As one of the UK leaders in LED lighting solutions to commerce and industry, Ecolighting has worked with many other big name companies such as Kuehne Nagel, Man Truck & Bus, Carlsberg, Culina and Cadburys.